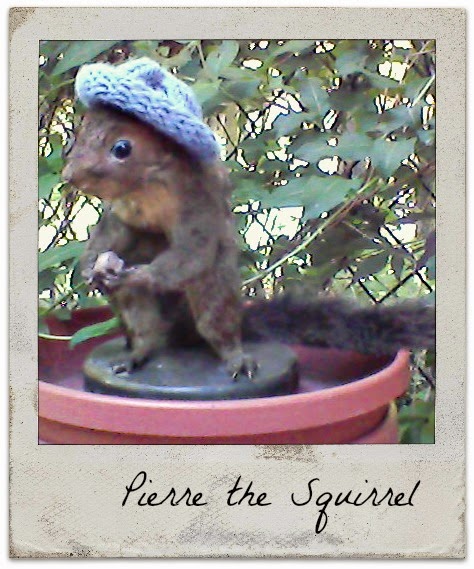 There are some things that I never imagined would happen in my life, and one of them, was that I would share our home with a one-eyed, one-ear, hat wearing, taxidermy squirrel named Pierre. Always in sympathy for animal rights, the mere thought of a dead one being stuffed, and used as decoration, really turned my stomach. But, as I got older, I realized that, like people, they all have different stories, and not all arrived through improper means.

Years ago, we weren't so concerned with protecting the lives of animals, and they truly were used for sport and food. I won't get into the politics of it, because we all know, but thankfully we have become wiser to the impact that our hunting pleasure had on the world, and there are rules about what can and can not become a trophy or an over-sized ash-tray.

What once seemed like a very macabre hobby to me, is now an art, and has become a powerful way to remember the past, and examine animals that may soon (or already are) almost extinct. However, my experience with taxidermy is less than exotic, and definitely doesn't involve a loved and protected species.

Several years ago, my daughter and I used to watch Oddities, a show about a small shop in New York City called Obscura. Each week, they would introduce a few customers, and take the viewers on a tour of their bizarre collectibles; everything from a shrunken head to a medical device that made you wince just to hear the name. It was an education into the (often) less desirable side of history; a place filled with curiosities and questions.

So, for her birthday one year, I decided to take my daughter to the store, as a surprise. She was thrilled, and, thankfully, the store was exactly how it appeared on television (even the misshapen, wooden mannequin was propped up crookedly outside, sweetly enabling the Obscura sign).

With all her money in her hand, I told her she could buy anything she wanted (while keeping my fingers crossed that it wouldn't be anything too horrible). Not everything was expensive, but condition mattered, and the more unique, pristine pieces were definitely out of her league. Many didn't have prices on them, which made it difficult for a young girl with birthday money. Still, it was a wonderful place to look around, and the questions just poured out of us. The shop was empty, so we spent over an hour in there.

Every now and again, she would go back to the squirrel's on the shelf. There were two; one was very nice looking, with a shiny coat, and the other was very old, and very scraggy. We were told he was from the 1950's, had been used as a teaching aid in schools, and had just returned to the shop recently. I have no idea what they were teaching, but he was obviously well loved. One ear was missing, and a glass eye had popped out, but he was holding a nut, and the wooden mount had a lovely age to it. I wasn't thrilled with the idea of bringing him home, but it could have been something much worse, and I understood why she wanted him.

She felt sorry for him, and hoped he wasn't too much money when she asked for the price. It took every dollar that she had, but she was so happy that she could afford the broken squirrel in her favorite shop. They put him in a paper bag, and she immediately took him out, wandering down the street with a dead, stuffed squirrel in her hands.

I cringed as she carried him through the front door, wondering how on earth he would fit into our home, what type of crazy mother was I, and did it even matter? But, he had a kind face, and his past was unknown. He just needed somewhere to be. So, we found him a shelf to sit on, we gave him a small, blue hat to make him feel less injured, and then, with what seemed like perfect timing, his tail fell off....
Posted by Wendy Wrzos at 11:52:00 AM No comments: 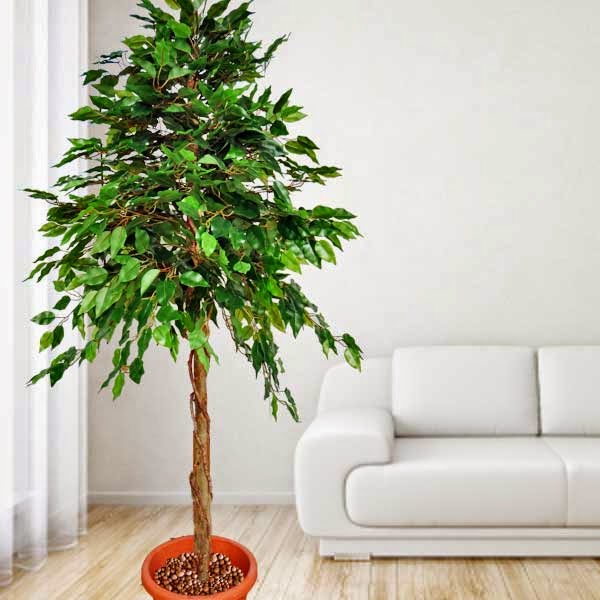 I have a Ficus tree in my Living Room. I bought it a long time ago; unbraided the funky stems, repotted it, and it grows a little every year. It drops leaves in the Fall, and grows new ones in the Spring, but even though it fills the corner very nicely, it is a very uneventful plant at the best of times. (Unfortunately, it resists any type of neglect, and it chooses to ignore my bored looks when I sigh over its predictability). I even put fairy lights on it at Christmas, wanting to like it, but we both know it is not my favorite plant in the house.

At least Fifty percent of the homes I visit have fake Ficus plants. The idea is good; they add height, and a splash of dark green without the maintenance, but they all look exactly the same. I promise, I am not going to diss artificial plants anymore (there are too many of them around for me to keep protesting) but with a small amount of effort, your fake Ficus can become a real, decorative part of your home, instead of some wicker-clad, dusty accessory.

So, for everyone who is holding onto their fake, and telling me they can't grow plants inside, here are some ways to make it look a whole lot better.....

-  Wipe the leaves and stems with a damp cloth to remove dust etc.
-  Treat it like a real plant. Buy a large pot (at least as large as the basket it came in) and a plant saucer for it.
-  Remove it from the basket, and take out as much filler as you can.
-  Re-pot it into the larger pot, with potting soil. (If it feels too light, add some rocks, or a brick, to the bottom so that it doesn't tip over).
-  Put it in a corner, or by a window (somewhere that makes sense for a living tree).
-  Take care of it; wipe it with a cloth now and again, and check the soil.
-  If it starts to fade, and look sad or shabby, take a deep breath, say good-bye and throw it away. 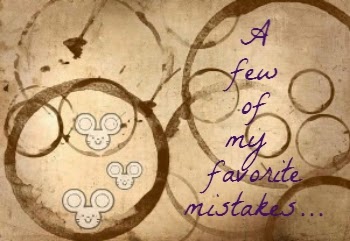 If you Google Decorating Mistakes, you will get dozens of posts on what not to do; design rules, do's and don'ts, and lots of ideas on how to do it all right (by not doing it wrong).

I was looking through some photographs the other day, and I came across one that I had totally forgotten about. When we first moved into our house, it was a sea of carpet; a lot of pink, and even more beige (and not in a good way).

Because I was at the beginning of my decorating life, it never occurred to me that I could remove the awful carpet, but I did think (in some delusional way) that it was perfectly normal to paint the sofa. With coffee.
Never mind the process of how much coffee it took, and how long it took to dry (until the sofa was dragged to the curb), we also couldn't sit on it, and, it started to smell really bad.

Even now, I don't understand what I was thinking, but I love that I didn't care what anyone thought, and I laugh that I made the conscious decision to permanently saturate my sofa with gallons of cold instant coffee.

While I can't think of anything else as bad as this (well, I can, but it's too embarrassing to write) I have to confess that my home is a constant moving part of who I am, and I never strive for perfection. However, some things can be avoided, so here are a few of the mistakes that I have made (so you don't have to). 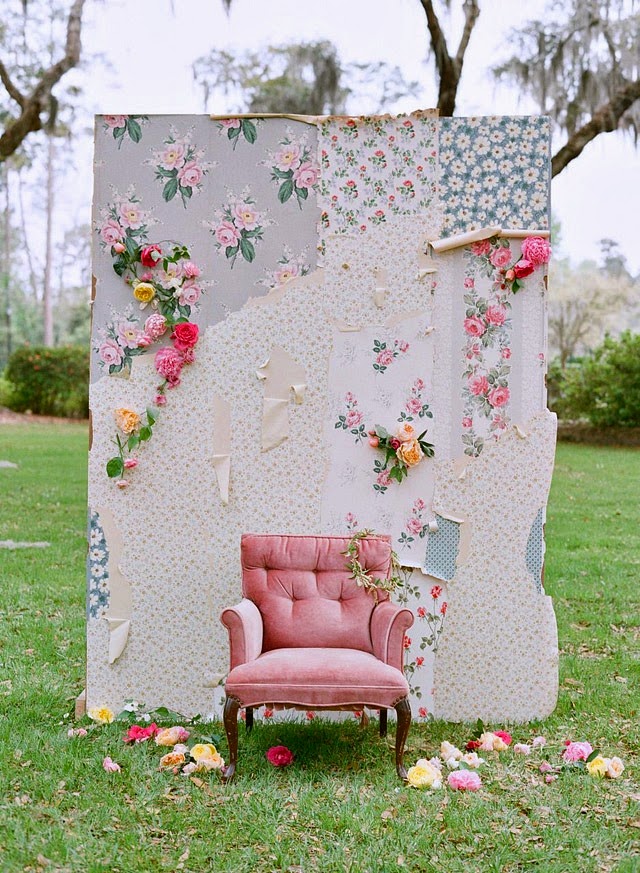 When I moved into my house, over twenty years ago, there was a lot of tiny floral wallpaper (and contact paper - remember that?) all over the house. I promptly wallpapered over it with a gigantic floral wallpaper, and decided that pink and blue flowered linoleum would also be a good idea (to tie it all together, of course).

A year later, I couldn't stand either of them; the floor came up, and the wallpaper was painted over. I had tried to get it off, but apparently the wallpaper was the only thing holding up the wall; when I peeled off the seventh (yes, really) layer of paper, I could see through to the bathroom on the other side. I am embarrassed to say that I glued it back, stuck on some cardboard, and called it a day.

Like a lot of people, my decorating style changed shortly after. We were all a little traumatized by the cuteness of the 80's, design quickly flip-flopped into a more formal way of decorating, and everyone fell in love with the concept of coordinating fabrics. Plaids, stripes and chintzy florals were the darlings of the design world, cherry replaced oak, and our fabrics just had to match the pre-pasted border in the kitchen.

In hindsight, it was a world that quickly wore out its welcome. Too many people followed a trend that didn't suit who they were, and we ended up with a lot of homes that looked the same; personalities were replaced with burgundy stripes, and an unused formality created rooms that struggled to be enjoyed.

Fortunately, trends change, and as we became more casual, the formal patterns still had their place, but happily shared the limelight with more modern ideas. Greedy for more, we now demand that designers give us what we want, and make it affordable.
Right now, there is no limit to what we can have, and where we can find it. We are no longer tied to a trend, we can design our homes exactly how we want, and we can still choose to have pink and blue flowered linoleum ....

Gorgeous photograph from things-i-love
Posted by Wendy Wrzos at 5:20:00 PM No comments: