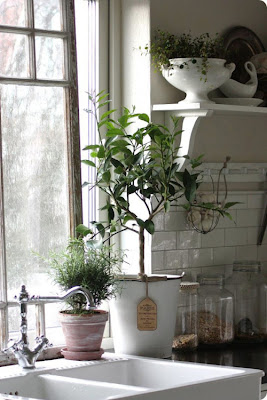 I am not French, but I do have a tendency to drool over shows that have that “C’est la vie” type of vibe to them. I know it’s not real life, but I find it relaxing, and I love to watch someone take hours to cook a meal (then spend several more hours eating it on a sunny terrace, with lots of wine and seventeen of their closest friends).
After watching too many episodes of “French Cooking at Home”, I decided that I would move to France, have a blue kitchen with copper pots, and grow lots of herbs on the window-sill.
In the meantime, before I got to France, I would pretend; I would pretty up the inside of my refrigerator, find a copper pot, and store my milk in beautiful glass bottles.
At a Home store, I found glass bottles with the work “Milk” on the side. Perfect. I took them home, and poured my milk into it (I can feel you rolling your eyes even as I write it – I know, what was I thinking).
This went well for a few days, until the milk began to sour. I didn’t understand why, so I would pour out the spoiled milk, wash the bottle, then pour new milk back in. It would sour again, and I would repeat the process. When I mentioned this to my Mum, she said that I needed to sterilize the bottle before pouring the milk in. (Why I never thought of this, I don’t know; I just continued to create my own little, repetitive bottle of bacteria – proof that Science really was my worst subject in school. Thankfully, no-one got ill during the process). So, I took her advice, boiled the hot water, poured it in, and the bottle shattered all over the kitchen sink. Undeterred, I did it again. Same result.
Not to be discouraged, a few days later I drove to a fancy store that sells milk in bottles. I found the bottles, picked one up, and cut my hand on the side. As it  trickled down my hand, I tried to grab a band-aid from my purse, while trying to (discreetly) wipe the milk bottle. The more I wiped, the more I cut my hand, and the more it started to make a mess of me and the bottle. The more I panicked, the more ridiculous my whole plan was starting to seem. Why had I driven over an hour to buy a bottle for my milk, so that I could pretend to be French? I wasn’t feeling very relaxed, or very smart, at that moment.
Embarrassed, I managed to get the band-aid on, wiped the bottle on my skirt (of course) and took it to Customer Service. I bought two new ones, and took them home. A little stressed, not very clean, but successful.
The next day, I remembered to be French; I reorganized the fridge, put vegetables in pretty bowls and admired my bottles of milk. Was it a little silly? Maybe. Was it worth it? Yes. The (always sterilized) milk bottles are living happily in my fridge, I now have one herb growing on my windowsill, and I still dream of a blue French kitchen…
Photograph from the delightful Lilla Blanka
Posted by Wendy Wrzos at 12:25:00 PM 2 comments:

Ever see those pieces of furniture that transform into something else? You wonder who made them, and why (or if they really work?). Check out this months newsletter for lots of fun facts you ought to know...
http://us2.campaign-archive1.com/?u=128e89b52ee61648d842a2d4d&id=c162ced392 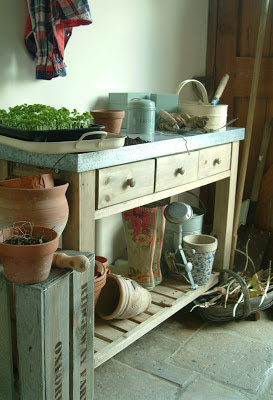 If anyone ever doubted the power of plants, they should meet one of my best friends. Just when I start to dread the cold Winter days, she always calls to tell me that she has lots of extra flower bulbs to share. Over a cup of tea, we go through them, and she tells me which is which, and how soon they will flower. We talk excitedly about how she ordered too many, and that there is not enough windowsills to put them on, but just the idea of having them makes us both happy. We spend the afternoon together, and I make a mental note to thank her again, and remember how grateful I am to be her friend.

Winter in the North East can be brutal. The skies are gray, and the garden is either covered in snow, or hard, misshapen chunks of mud. We know that Spring will eventually be here, but it is sometimes hard to believe it when we look outside. The bulbs really cheer me up, and are ridiculously easy to grow, but, more importantly, they are a positive sign of life - a green light at the end of a gray tunnel. Don't get me wrong, I do love the change of seasons, but I also miss not being able to enjoy my garden for months on end.

So, what do I do? For one, I make a huge mess in my kitchen sink, and I honestly don't care. We are always so concerned with keeping our houses clean, and doing things properly, that I love grabbing a pile of newspapers, spraying water around, and turning my kitchen into an impromptu potting shed. Frankly, even if I had a lovely bench like the one above, I would still use my kitchen; why not be inside, warm and cozy, while you plant flowers?

By now, the dog has already scratched the floors with wet, snowy paws, and the house is eternally dusty from the heating system, so I just decide to enjoy my time with the dirt. I keep a bucket of potting mix, lots of empty terracotta pots, and a giant spoon nearby for emergency planting (you never know when you may need to pot a plant in a hurry). I play my favorite music, and for an hour or two I plant and prune, and wonder what they will be when they grow up. I move them from window to window, seeing if they need more light, and noticing who blooms first. I save my jam jars, pot up extra bulbs and pass them onto another friend.Even if you don't love to garden, it's impossible to dislike a plant in the Winter.... Gorgeous photograph from www.gardentrading.co.uk
Posted by Wendy Wrzos at 10:53:00 AM 4 comments: