Did you know that Queen Victoria wore black exclusively for almost 40 years? She turned mourning into an Art form after her husband, Prince Albert, died. New fashions were created, and black jewelry (Jet, Onyx etc) were more popular than ever before.

This trend continued until she passed away. Eager to leave black behind, the former Victorians celebrated with pretty furnishings and decadent lifestyles. But, their colorful reprieve did not last long; Wars began, and England entered a very turbulent time. Black became synonymous with grief, disease and War, extreme times of hardship.

Now, many years later, women covet the LBD (Little Black Dress), but the color black, in furnishings, is still approached hesitantly. It sounds somber, and people worry that it will be too harsh, or overwhelm a room. But, used correctly, black can be one of our favorite accessories.

Many designers swear that every room should have a touch of black, and, as I go through my decorating adventures I tend to agree with them. Black brings gravity to a room; even the smallest piece will provide an inexplicable anchor that pulls an otherwise humdrum room together.

If you are adding it to a very light-colored room, then several small touches of black may be needed, one piece may not be enough to give you balance. But, in a more colorful home a simple picture frame or a lamp stand may be just enough. Even the tiniest black, brush stroke on a painting will bring more depth to a space.

When England finally recovered from the Second World War, they celebrated with color! Black was almost discarded, and everything in their world became lighter (fabrics, colors, jewelry, shapes, furniture).

We live in a time where color and design choices are infinite; a Queen does not dictate how we decorate our homes. Therefore, be bold, add a little touch of black, and watch your room come alive.
Posted by Wendy Wrzos at 9:53:00 AM 2 comments: 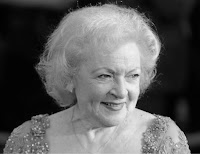 Everyone is talking about Betty White lately. She's on television again, presenting at award shows and appearing in Summer movies. As I thought about her sudden resurgence into pop culture, I started to think about recycling (sorry, Betty) and how we, as a society, sometimes discard things just because they are old.

Even if they are still useful, the lure of something new will often tempt us in a way that makes us forget about the things that we are leaving behind. Good grief, as soon as I wrote that I could hear the metaphors, but it wasn't intentional, so I'm leaving it in :-)  Instead of mixing metaphors, I decided to wander around my house and photograph some things that I have re-purposed, to fill a practical (or decorative) need.

Don't get me wrong, this is not a lecture on recycling, or saving the planet, more a reminder that we often have the items we need sitting in our houses already. Using unexpected things, for ordinary reasons, will always add personality to a home. Before buying, check around your home to see if you already have what you are looking for. It may not be exactly what you wanted, but that doesn't mean you can't use it (eg. put jewelry in your best china bowl or hang a painting with brightly colored thumb tacks).
Of course, creative shopping will never take the place of good, old-fashioned retail therapy, but that's an entirely different story.....